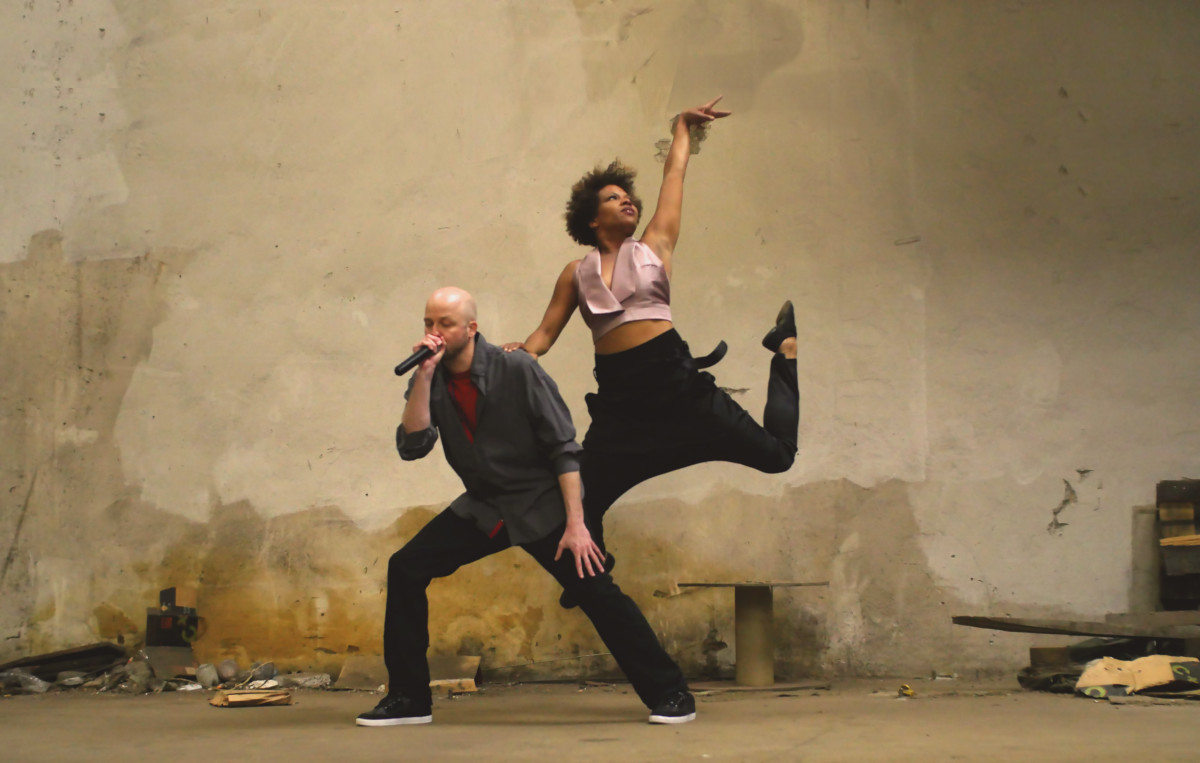 Maša Kagao Knez (dancer and choreographer, Slovenia) and Murat (hip hop musician, Slovenia) developed a cheesy soundy moving fusion, which interactes directly with images of contemporary dance and music and brings direct, open and unpredictable fusion of two languages, »sliding into one«, without a real stream, because both of them are all the time just – there. Taking images and situations from day-to-day instant & constant communication and transformation of internal pulsation of the thought to the external language of rhytm – could be seen and tasted as a soundy moving duet that brings increadable freshness and lightness in performing strategies, constantly corresponding directly with the spectator – without extra thoughts or explanations. Energy. Water. Fish. Lake. As an inherent vibration of moving & uttering bodies Maša & Murat seem to be timeless, colourless and even lakeless in the times where less is more.

Maša Kagao Knez and Murat. A combination of dance and music with overwhelming energy!
LakeLess was the grand finale of this season’s dance “boom”

…. the unusual dance-sound project LakeLess, in which voice and movement spread throughout the entirety of the stage in a tight creative embrace, a duo of modern dance filled with various innovative and unique movement transformations accompanied by a rhythmical background of a “beatbox” voice. When the two performers communicate without words in their dance-sound ensemble, they become as one, they become dance and rhythm. And when they translate their thought processes into a vision of everyday patterns and situations, mostly tinged with humour…

… LakeLess is a fresh and original fusion of movement and sound, two creative platforms which tightly intertwine and cannot operate individually, that is each on it’s own. The voice is not only in sync with the movement, it is a strong and equal part of movement. When both actors, the dancer and the musician, sing the poetry of two poetic souls and dance while simultaneously encompassing familiar life situations, they become the modern-era heroes of the silent film (it is like a silent film, but with sound), as the dancer is also able to use her voice and turn the rhythm of sound into voice…

…Project LakeLess represents a unique artistic concept in modern dance combinations of movement and rhythm, music and dance. It is also a very specific choreographic duet form which projects the everyday familiarity of common situations at a higher artistic level which albeit somewhat distant in our era of modern technology. This is why Maša and Murat are here – to bring us back to modern-day associations of visual, audible and emotional sensations, which continue to be the integral part of our lives on this planet…